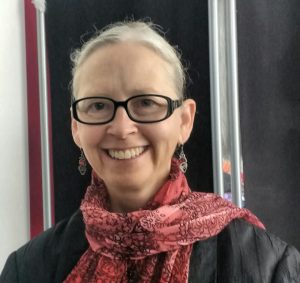 Ann-Marie MacDairmid – BMus, MMus is a native of Thornbury, Ontario. She studied music at Wilfrid Laurier University and The University of Western Ontario.

Ann-Marie is the Director/Accompanist for the Shoreline Chorus in Owen Sound. Shoreline is celebrating their 20th anniversary in the 2018/2019 season.

She serves as assistant organist at St. Andrew’s Presbyterian Church in Kitchener. She is the accompanist for the Grand River Chorus in Brantford and she is the director/accompanist of the Apple Valley Youth Chorus in Thornbury.

As well as being an organist, she is an accomplished pianist, percussionist and choral conductor working in a wide variety of musical genres including Baroque, Classical, Spiritual, Gospel, Big Band, Jazz and Blues, Folk, African, Broadway, Movie and Canadian music.

Musical projects become new programs as Ann-Marie directs the Queen Street Singers in Kitchener and teaches piano/organ lessons locally. She freelances as a piano accompanist and organist throughout Southern Ontario.

Matthew has recorded music for film including Deportation at Breakfast (2002), Lenore (2008), The Getouts (2008), appeared on the CW network in Nikita (2011) and on CBC in the Murdoch Mysteries (2011) and been broadcast on CBC Radio.  He has participated in festivals such as the Windsor Canadian New Music Festival and the Spoleto USA Festival (Charleston, South Carolina and toured with Video Games Live and the UK’s Libera Boys Choir (2010).

As a teacher, Matthew has led the Adult and Intermediate string orchestra at Centre for String Playing in Hamilton, and also taught group lessons through an in school program at a number of schools in Hamilton through the HWDSB. Matthew has also taught overseas in London UK helping students prepare for the Grade 3 ABSRM violin exam. In 2019 Matthew completed an intensive Teaching Artist training seminar though the Sistema inspired Orkidstra program in Ottawa ON. He lives in Annan with his wife and two cats.

Inspired by a program developed in Venezuela in the mid 1970s, The Big Sound creates opportunities for children and youth who, for various reasons, are often excluded from extra-curricular musical activities, such as playing in an ensemble or orchestra.